This update is so big, it’s Godzilla big. Because now you are the monstrous, lazer-breathing beast that hovers over Fantastic Contraption levels, the contraptions and wee Neko so tiny and innocent down there on the ground. Yes we do love room scale, but there are times and places where you just want to reach over your entire contraption without walking across the room.

And so we present: Kaiju Scale:

We’ve packed a ton of new features into this update. Read on, or watch this TL;DR video to get brought up to speed!

You can scale from 50% of regular room scale size, which can be comfortably played while standing in one place, way down to 10% roomscale which feels like playing with a miniature set of contraption pieces about the size of Lego. The controller flowers shrink down to smaller precision buds so you can more easily see what you’re doing in this tiny, detailed little world.

If your VR hardware is configured for a small space, the Room Setup menu will appear automatically the first time you play. You can force Fantastic Contraption into Kaiju Scale and reconfigure your space via the companion menu on your monitor:

During Room Setup two batons appear in the middle of the level. While wearing your HMD you can grab these to scale, raise and lower, move or rotate the world to fit your play space.

We’ve made some changes to the dark world to make everything more easily reachable. The Trashcan Frog has some new friends who proudly hold up the credit statues and other toys to play with. At the smallest scales everything appears in miniature. The tiny table filled with tiny tiny models is soooo cute.

Playing as a giant in a miniature world can give you a different perspective on levels. My favorite way to play is to scale the world down to about 25% and place it right on the floor, then I sit down on the carpet cross-legged and play like a toddler stacking blocks. I’ll let Colin illustrate: 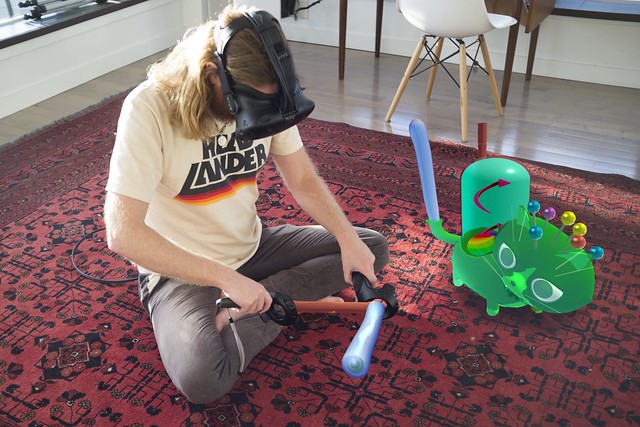 You could always tear your eyes out of your head, but now you can switch the companion-camera to follow your eyes around! Great for giving your viewers ringside seats to the entertainment.

There’s a new way to keep track of your favorite Contraptions both local and online: give them a smooch to favorite them! This bedazzles them with hearts and will cause them to rise in the ranks on the “Online Contraptions for this Level” shelves.

Our favorite toolbox-cat Neko’s been given a bit of a makeover, with a toothy new grin. We’re also using him to test out Steam Workshop modding, by letting players provide a replacement skin texture to change Neko’s color and appearance. Try it out! Here are the Modding Instructions.

We’ve started localizing Fantastic Contraption into other languages. First up is Japanese, which we needed last month when we showed the game at the Tokyo Game Show (where we won an award for Best Tech!). You can switch languages via the companion menu on your monitor. We may be adding more soon, or you can make your own using the Steam Workshop (see modding instructions here). We’ve been having a bunch of fun bringing new 3rd person avatars and hats into the game. Change avatars or hats by grabbing the maquette and pressing the directional thumb pad left/right/up/down. Switch to 3rd person view (camera icon on the companion menu on your monitor) to show these off to people watching in the room, or use the Twitch tools or GIF recorder from our Social Update to share online.

New for Twitch: people in chat can now vote for the avatar or hat you’ll wear by typing !avatar wolf or !hat viking. Votes are tallied every 60 seconds and the avatar and hat changed to the crowd favorite. Full usage:

There have been quite a few other changes to improve stability and prepare for the upcoming Level Editor (next major release!). And there’s more yet to come…

Andy Moore sat down with our friend and fellow VRnaut Kayla Kinnunen for a little fireside chat to discuss all the above features in a much-too-long-winded fashion. If you want to experience the thrill of awkward pauses and dry jokes, check out the 15-minute epic on youtube!